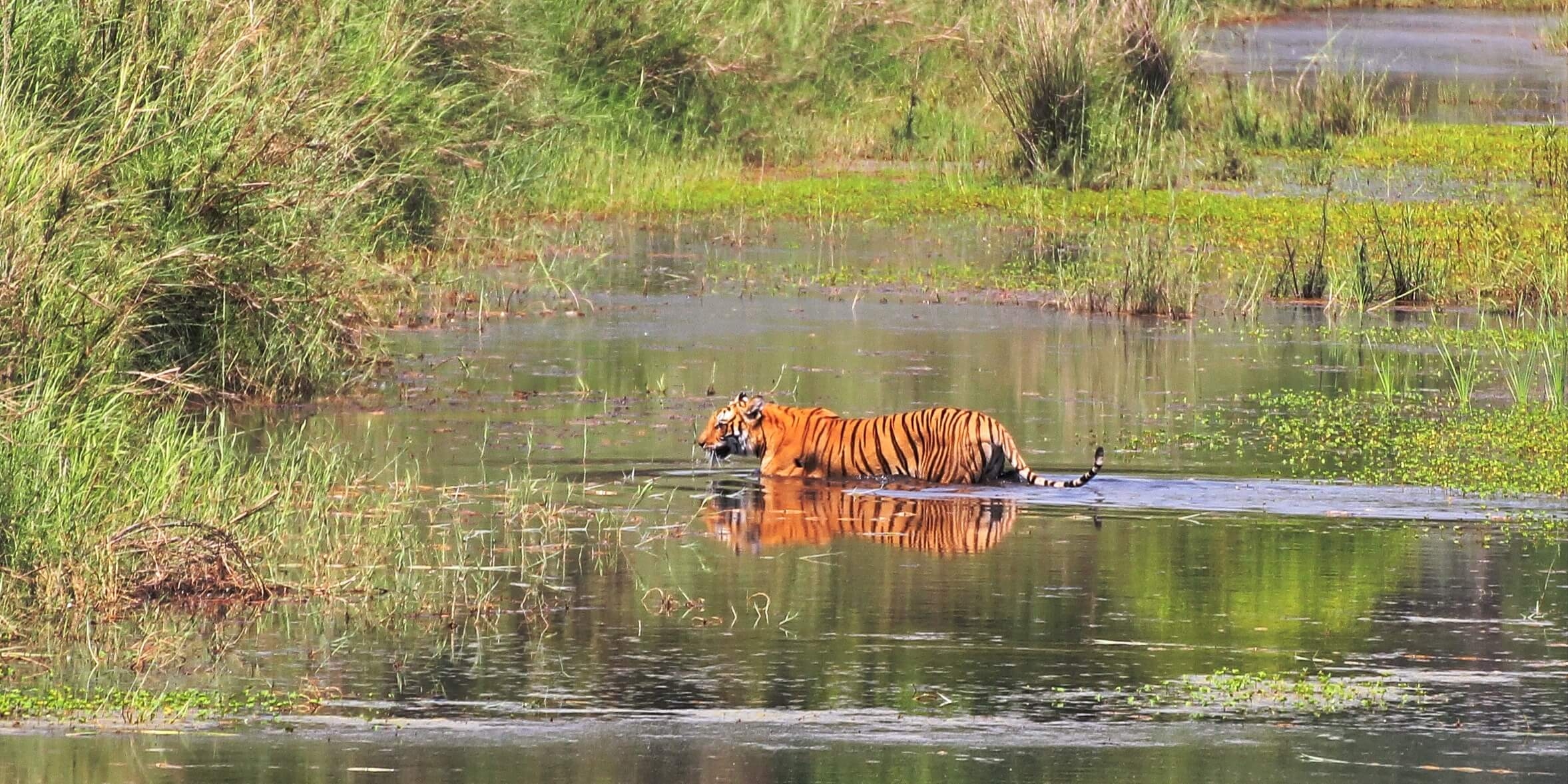 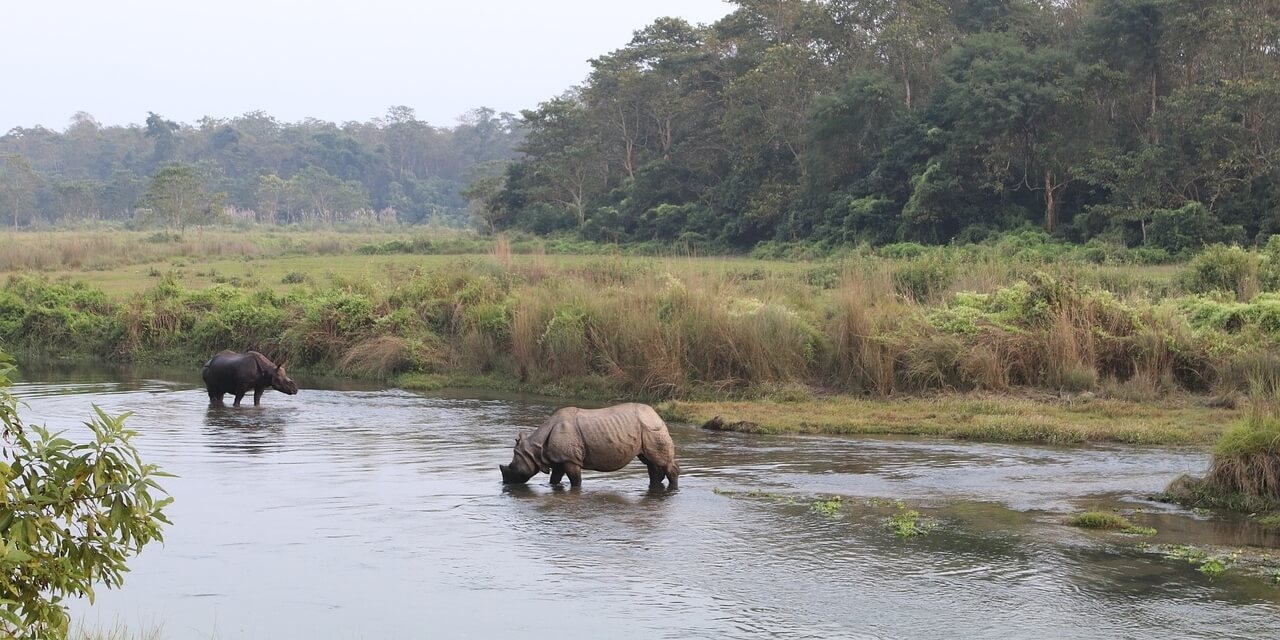 Bardiya National Park is located Far South West of Nepal around the low-land of the Terai belt, within the semi-tropical climate. Where deep dense green jungles are situated with rural farm villages around the park boundary. Bardiya National Park is one of the largest game parks with an area of 968 sq. k.m. situated within the east of the great Karnali River that flows downstream from Mt. Kailash in western Tibet. The charm of Bardiya National Park is its remoteness undisturbed location and isolation with fewer numbers visitors.
Bardiya National Park offers exciting wildlife safari on an elephant, jungle drive on four-wheelers, and much more. The park is enriched with exotic mammals of 30 different species with over 200 different birds' life. The birds that reside around the park are Florican, Silver earned media and Sarus crane. Includes various types of rare reptiles, snakes, and lizards. Where all can enjoy the thrill of jungle safari in the comfort of nice lodges and resorts.
Located close to park premises and close to lovely villages of local Tharu, the indigenous tribes of the Terai belt. Due to its remote location with two options to reach Bardiya National Park are the fastest and easiest way. A flight from Kathmandu of 50 minutes to Nepalgunj city airport, and then a few hours drive to park premises.
Where all lodges and hotels are situated, the other route is taking a long drive of more than 6-7 hours. All jungle safari is guided by professional jungle guides and naturalists, showing you the wonders of amazing wildlife. Jungle safari and activities are programmed by the lodge and hotel management according to Park rules and regulations.
Activities include bird-watching, nature walks, including jungle safari on elephant backs and jungle drive, and visiting the local Tharu village.  During your stay at Bardiya on safari, observe wild animals like Tiger, and Rhinoceros with four types of deer. Includes river life of crocodiles the marsh mugger and Gangetic Gharial and freshwater Dolphins around the rivers within the national park.

Nearly all months of the year, except the monsoon wet rainy seasons of July and August months. Best in spring with wildflowers in full bloom and autumn from September to November as well in early December.

From your hotel/resident, transfer to Kathmandu domestic airport for the exciting flight of 50 minutes to Nepalgunj city airport. During flight enjoy a super panorama of the Himalayan mountain range from Langtang, Ganesh Himal with Annapurna, and Dhaulagiri Himalaya.

On arrival at Nepalgunj city airport received by the hotel staff and guide for a few hour drive to your lodge/hotels close to Bardiya National Park. At the lodge briefing regarding jungle activities, time for breakfast, afternoon tea, and dinner. After checking your nice rooms with time to explore the local Tharu village of great cultural interest or take a nature walk.

Early morning before breakfast enjoy a refreshing cup of tea-coffee, then join in for nature activities like wildlife safari, elephant ride into dense jungle on the lookout for exciting wild mammals around its natural habitat.

After the morning jungle program back to the hotel for breakfast, have a rest and then the morning program continues visiting elephant stables, and a canoe ride on the nearby river to observe water birds and Gangetic Gharial, Marsh Mugger crocodiles, as well as chances glimpse of freshwater Dolphins.

Morning enjoys various nature programs on the last day at Bardiya options for bird watching or nature walks, after breakfast depart from the lodge, for the short drive to Nepalgunj city airport for the scenic flight back to Kathmandu. After checking in as per the flight time then an exciting flight reaches you back at Kathmandu. On arrival at Kathmandu airport, then transfer back to your residence or hotel after a great experience in Bardiya National Park.

Bardiya National Park is located in Nepal Far South West around the flatland of the Terai belt within a low warm sub-tropical climate.

Due to its remote location, the park gets a few groups of visitors once in a good season of time, where Chitwan is famous due to its close location to Kathmandu and Pokhara.

The shortest way is taking a 50 minutes flight from Kathmandu to Nepalgunj city airport and then driving for a few hours to the park premises where all the good lodges and hotels are located. The other option is taking a long overland journey of more than 7 hours to reach Bardiya National Park.

1 days
from
USD 85
Price starting from 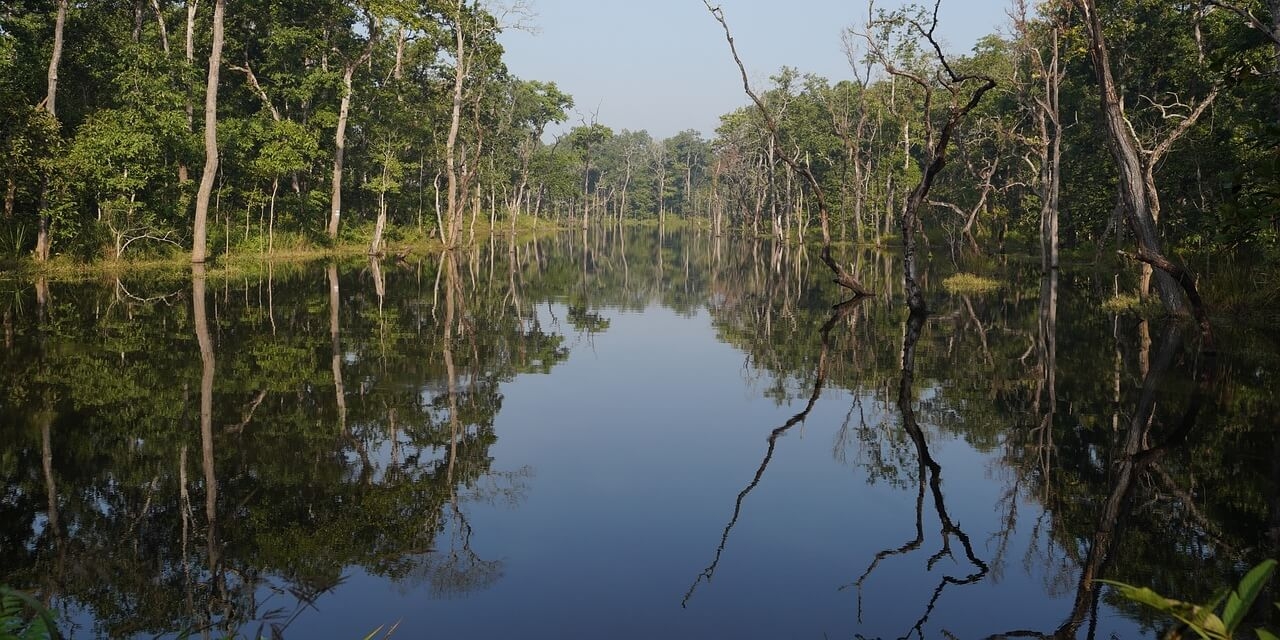 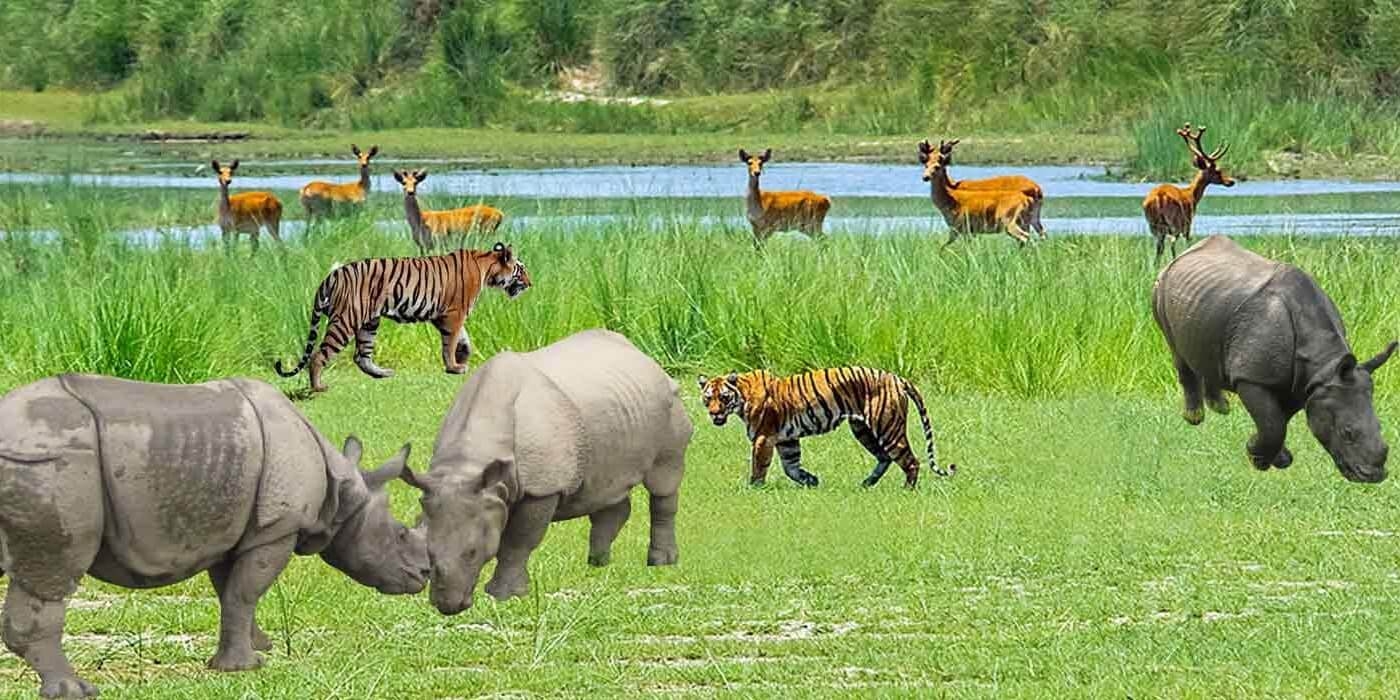