Level
EASY
Transportation
Private vehicle And Heli tour
Best Season
Throughout the year
Accomodation
If, you Request
Meals
If, you Request
Starts at
Kathmandu
Ends at
kathmandu
Trip Route
Langtang and Gosaikunda and Helicopter Tour

Types of Helicopter Model operates in Nepal for a commercial flight to Langtang & Gosainkunda and other Himalayan destinations. AS 350 B series helicopters of Euro-Copter, France popular all over the world and Ecureuil model or similar model and types of a chopper. Built for high altitude and mountainous landscapes, suitable for Himalayan countries.

Nearly all year round when days are fine and clear for views and flights. Except for the monsoon wet months of June to middle September. The best time is in the spring season from March to May, and autumn times from September to November as well as the pre-winter times of December and January.

Langtang & Gosainkunda Helicopter Tour is the shortest and smooth flight over the rolling green hills and valleys of Nepalese beautiful landscapes. An enjoyable joy ride within the Himalayan blue sky facing an unparalleled panorama of the mountain range from Central to Eastern Himalayas. Langtang Himal, located within Central Himalaya the closest mountain range from the capital Kathmandu, with an aerial distance of 32 km. North to Old Trans Himalaya Salt Trade and Caravan Route of Nepal-Tibet/China, where trade still exists between both borders.
Langtang & Gosainkunda Helicopter Tour starts early morning on a fine clear day, overlooking fantastic views of Nepal's rural countryside. In the comfort of a chopper then landed at Kyanjin, a nice settlement situated in the heart of Langtang valley. Enjoy the scenery as far as your eyes can take facing the Langtang Himal group of peaks that surrounds the beautiful valley. After an exciting stop at Kyanjin with time for refreshing hot drinks and then head northeast to Gosainkunda. After a lovely stop in Kyanjin at 3, 800 m high, then leaving the beautiful Langtang valley.
Facing grand views of Ganesh Himal 7,405 m, Langtang Lirung 7,234 m, Ghengu Liru or Langtang- II 6,571 m. Along with Naya-Kanga / Ganja Chuli 5,846 m, and as far towards Dorje Lakpa 6,980 m. Includes peaks across the border of Tibet, as Langtang Himal forms the great barrier between Nepal and Tibet / China. A view of Himalayan peaks follows you all the way to Gosainkunda. A glacial lake is regarded as one of the holiest sites in the whole Himalayas range. Once a year in the month of August during full moon time a great Hindu religious festival takes place.
The Helipad at Gosainkunda is close to the glacial holy pond, with time here to immerse within the peaceful surroundings. Where thousands of devotees and pilgrims visit at auspicious times for a dip and a bathe in the holy pond. Enjoying great moments at Gosiankund with a stop at Kyanjin around Langtang valley, return journey flying down south to Kathmandu. On landing at Kathmandu airport, transfer back to your hotel after a marvelous experience on Langtang & Gosainkunda Helicopter Tour.

How much does a Gosainkunda or Langtang valley Helicopter Tour cost?

By 6 a.m. depart from the hotel for a short drive of 20 minutes to Kathmandu domestic airport. After checking board in a helicopter, soon as it takes off enjoy a panorama of Kathmandu city and the valley. As well as facing a wide range of Snow Mountain range towards the north.

The Helicopter heads direct North leaving Kathmandu valley, over rolling green hills dotted with villages and terraced farm terraces. The air journey continues heading above a river gorge covered in dense forest, and soon landing at beautiful Langtang valley. The helicopter stops at Kyanjin a lovely settlement with many nice lodges, where one can enjoy a warm cup of refreshing drinks. Enjoy the magnificent view from Kyanjin towards the snow-capped peaks of Langtang Himal range relaxing and having a refreshing cup of hot coffee.

After a wonderful moment taking a short flight over green hills and above villages to land at Gosainkunda. A holy spot for Hindus with a small temple of Shiva by the lakeshore of Gosainkunda. A marvelous location enclosed by high snow peaks and rocky jagged rocky cliffs, a famous pilgrimage place. Where thousands of devotees make a pilgrimage once a year, to the holiest of all holy abodes of Lord Shiva Gosainkunda.

After a wonderful moment back to Kathmandu, flying above rolling green hills covered in a dense forest of pine and rhododendron. On landing at Kathmandu airport transfer to your hotel after a great experience on the Langtang valley & Gosainkunda Heli Tour.

From Kathmandu towards Langtang Himal & Gosainkunda is about 32 km aerial distance, where the drive can take more than 5 hours to reach the starting point of the trek to Langtang valley. On Helicopter flight taking less than an hour to land at scenic and beautiful Langtang valley around Kyanjin, a small settlement full of good lodges for travelers. From Langtang Valley unto Gosainkunda about 15 minutes flight, located just over the southern mountain range of Langtang Himal. A total of 1 and half hours or 2 hours having stop at Kyanjin and Gosainkunda for refreshment and taking pictures.

Normally two, the main pilot or captain and co-pilot, but for higher altitude above 5,000 m, and due to load capacity of passengers. Where one pilot the captain handles the helicopter, which provides an opportunity for some passengers to sit next to the pilot in the front.

Helicopters for the commercial flight can fly above 6,000 m high, and land at 3,000 m or more to 5,000 m. Where’s on this flight landing at 3,800 m high in Kyanjin around Langtang Valley enclosed within Langtang Himal range. As well at 4,381 m in Gosainkunda a holy pond.

Nearly all seasons of the year except for wet rainy times of monsoon from June to August, March to May in spring one of the best time as well autumn season from September to November is also the good time to visit Langtang valley and Gosainkunda. 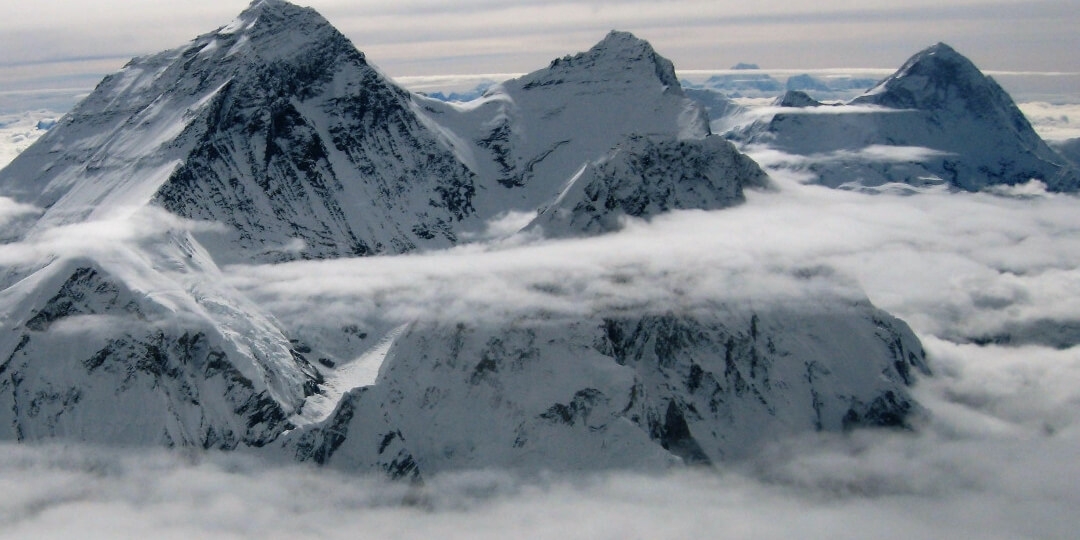 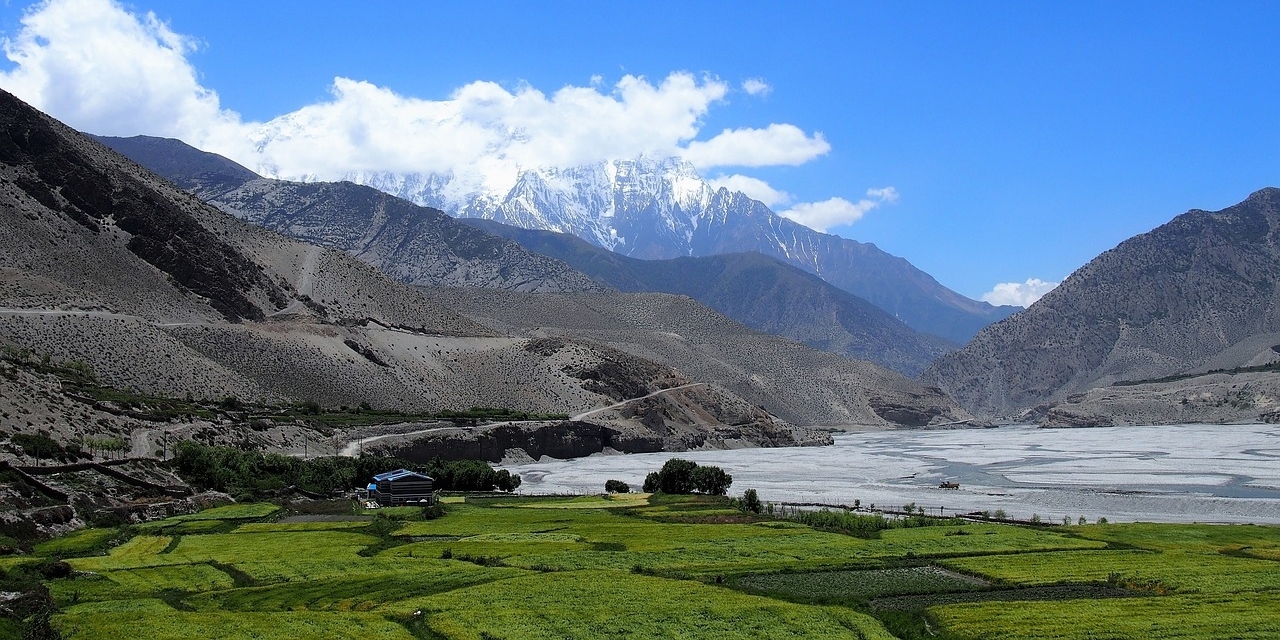 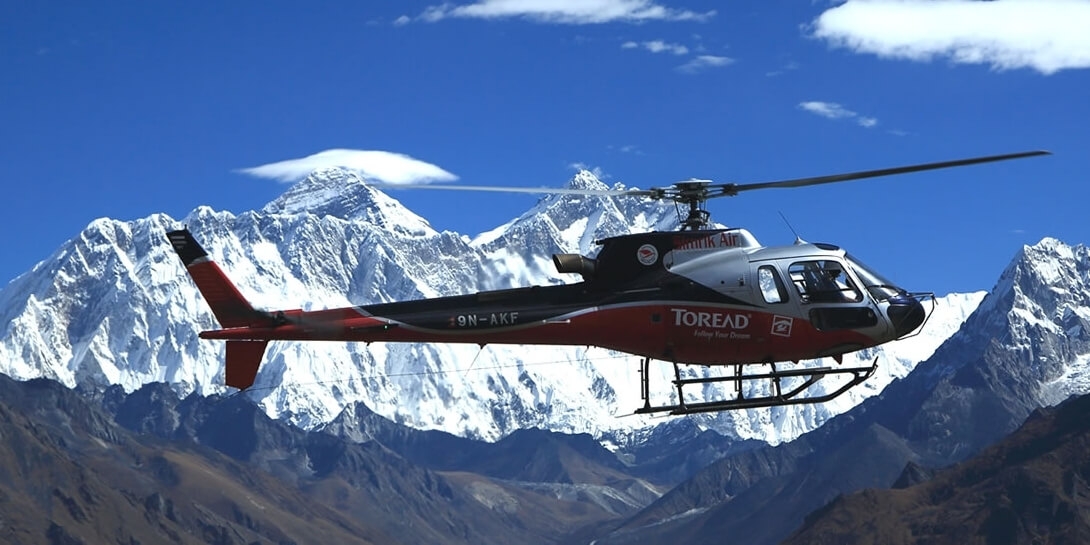