Annapurna Circuit Trek was opened to foreigners in 1977 A.D. Since then this route has been a popular and renowned destination for people around the world. In this entire trek, you will pass through charming villages with lush green valleys and around the snow-capped mountains. Starting from 1000 meters, you will reach the top point of around 5500 meters. The main attraction on the trek is Tilicho Lake (best known for Lake located at the highest point in the world), Thorong La Pass (highest Pass of the world), Multipath Temple (holy temple for Hindus), a closer view of Annapurna Range and Manaslu Range.
After conquering Tilicho Lake, you can trek via two routes firstly you can march via Mesokanta La Pass which ends at Jomsom. Secondly, you can get back to Yak Kharka and meet the same destination through Thorang La Pass. Trekking on these routes gives you the experience of trekking in a semi-desert area to greenery vegetation. The trail ascends from Manang Village to the Thorung La Pass (5416m), the highest point on the Annapurna Circuit Trek, the pass, trekkers enjoy spectacular views of Mustang Peak, the snow-covered giant Mt. Dhaulagiri (8167m), and the amazing lands of Upper Mustang, a restricted area. After crossing Throng La Pass (5416m) the trail descends to the Hindus Temple of Muktinath, a celebrated Hindus pilgrimage with 108 spring water taps and mysterious natural gas fires. The trail then descends along the edge of the Kali Gandaki River Valley to Jomsom, a major center for the Mustang District.
Tilicho Lake stands at 4970 m above sea level. Annapurna Circuit Trek with Tilicho Lake is getting a famous trekking destination in Nepal. After built the driving road till Manang trekkers like to combine Annapurna Circuit trek with Tilicho Kathmandu by private jeep, the public bus then treks to Throng la Pass via Manang, Tilicho Lake, Yak Kharka would be an amazing experience in the Annapurna region. Cross the Throng la pass and long descend down to Multipath then trek to Jomsom (headquarter of Mustang district) then fly to Pokhara from Jomsom would another unforgettable experience on this trek. finally, you arrive at Pokhara relaxed flight to Pokhara, and then to Kathmandu.

1
You will be welcomed at Tribhuwan international airport with a beautiful Nepali greeting "Namaste."  Take a rest you might have traveled on the flight for a long time, or you can visit the nightlife with A warm and authentic Nepali meal will be offered to you at dinner and later you can enjoy some folk cultural music and dance. Overnight at the hotel.

3
This is the starting day of your tour, so get up early and have breakfast. Get a reserved vehicle or local bus or tourist bus, tourist bus might be easy and cheap for you as you have to travel around 6 hours on the bus. Have a delicious lunch at Besi Sahar, and then hire a local jeep a ride of 4 hours will take you to Chame. On the way, you will capture a beautiful glimpse of Tal village and waterfalls. Stay overnight at Chame.

4
Starting day of trekking, on this whole trek you will be talking alongside Marsyandi River to Chame at the altitude of 3300 meters. Wake up early so that you don't miss the first rays of the sun on Lamjung Himal which gives you the heavenly touch of sunset on the mountains.  After climbing Mani walls, you will be welcomed by a tiny village Telekhu. Before Pisang, you will be electrified with a beautiful view of waterfalls and a 360-degree view of snowcapped mountains. A walk of around 6 hours will let you to Pisang, overnight at a hotel

5
Get up early pack your bag and have breakfast, it’s around 6 hours trek from Pisang to Manang. There is a viewpoint on Ngawal from the spot you can explore the marvelous view of Annapurna II and Annapurna III. You will go through grasslands and pine forests on this trek before stepping to Manang. Stay overnight at Manang.

6
Manang valley provides is famous for its rich flora and fauna, this semi-desert valley is surrounded by mountains including Annapurna II, Annapurna III, Annapurna IV, Marketing, and Gangapurna. Milarepa Cave will be an attractive destination for you as it has religious and historical importance. During the eleventh-century Jetsun Milarepa, Vajrayana Mahasiddha, and other Tibetan Buddhist philosophers spent years in the Holy Cave. Kicho Tal or Ice Lake in Manang valley is believed to have magical, according to locals in the lake people see things of their dreams or imaginations. Other exciting places you can explore are Gumbas, Gangapurna Glacier Lake, and traditional stone buildings.

7
Trek route descends from Manang, so stay hydrated to get rid of altitude sickness. On the way to Khangsar village, you will pass through Jharsing Khola (a junction of Marsyandi River and Glacier Dome) via a suspension bridge. After trekking few hours, you will approach Khangsar from there you will get a mind-blowing northern slope back yard view of Manang Valley. You will get to see Mani walls, the small monastery with colorful flags. Stay overnight at Khangsar.

8
Wake up early have breakfast, it would be better for you to move early and cross the Landslide area before noon. Afternoon the speed of wind might cause continuous falling of stones from the top of the mountain, which might cause you injury. You will pass through beautifully crafted Gumba and Chortens, along with bushes and juniper on both sides of the way. After hours of ups and downs and the zigzag road, you will reach Tilicho Base Camp. IN TBC, there are only a few hotels, better to book the hotel before you are there. This is the best spot for viewing the 360-degree panoramic view of Tilicho Mountain, also at night, you can see a clear moon, star, and entire stardust.

9
From TBC you have to elevate a height of around one thousand meters, so you are going to have a tough day with whole day trekking. Get up early leave the hotel room as soon as possible, the best time would be before 5 am so that you can grab the opportunity to view the sunrise of the face of mountains. The remarkable peak you will walk side to be Gangapurna, Khangsar Kang, Tarkeghyang, and Tilicho Peak. After four hours of trekking, you will reach Tilicho Lake which makes you erase all those pains and stress you faced to get there. Have a cup of tea or coffee at a small tea shop side of the lake, take memorable pictures, and spend quality memorable time out there. A couple of hours at Lake, return as you have to trek a long way, get back to Tilicho Base Camp, and have lunch there. After lunch return to Srikharka, ways are downhill so it will be easy for you to walk on the way while you are returning.  Stay overnight at Sri Kharkha hotel.

10
You have to travel through the northern valley steadily gaining an elevation of Marsyangdi Valley. The vegetation in these areas has alpine grasses and juniper scrubs. Follow way passing Old Khangsar which will lead you to an altitude of above 400 meters crossing a small river between Yak Kharka and Ginseng. From Yak Kharka, you will get an excellent and top to the down view of Annapurna III peak. Stay overnight at the hotel.

11
You will climb along the sideway of Jarsang Khola and later have to descend across a wooden bridge. A closer view of the Annapurna range will energize every moment of the trek. Besides panoramic views, if you are lucky, you can get a glance at the snow leopard. Blue sheep and crow-like black choughs are seen commonly. Stay overnight at Throng Phedi.

12
The trail declines from Throng Phedi and has steep ways to Multipath temple. From Thorang Phedi rocky ways ascends you to the highest point on this trek, the Thorang La Pass which is a height of 5416 meters. The view from Thorang La Pass fascinates with long Great Barrier ridge, a glaciated peak of Khatung Kang, Gangapurna Peak as well as Annapurna Peak. The trail declines down to Multipath Temple, which is one of the most important pilgrimages for Hindus and Buddhists. From Hindu mythology, it is believed this pilgrimage is a gateway to Heaven. Stay overnight at Multipath.

13
Starting the trek from Multipath will take you to the ancient village Kagbeni, which is a gateway for Upper Mustang. Kagbeni is rich in culture with numbers of a monastery, Gumpa, and Chortens. You will pass through the Kaligandaki River, where you will get Shaligram a revered fossil. According to Hindu mythology, it is regarded as the incarnation of Lord Bishnu.  You will also get to see the ancient cave, Gumpa, monastery while roaming around Kagbeni. Have lunch at Kagbeni along with Marpha (local apple made brandy). Roaming around Kagbeni. Stay overnight at Jomsom.

14
Take an early morning flight, a flight of around 30 minutes will land you in the beautiful city of Pokhara. Pokhara welcomes you with a smile of Macchapuchre Peak (Fishtail Peak), along with Macchapuchre you can have a gorgeous view of the Dhaulagiri and Annapurna mountains. You can explore Kali Gandaki gorge (the world's deepest gorge), Mahendra Cave, Bat Cave, David Falls Waterfall, and Peace Stupa. If you are an adventure lover, you can go paragliding in Sarankot. If you can extend a day in Pokhara, you can hire a cycle or motorbike for a day ride at Sarankot or Pame.Pokhara is a chill city with a happening environment evergreen; you can find many local and foreign tourists every season in this city. In the evening visit a local pub, where you can have beautiful music with chill beer. Stay overnight at Pokhara

15
After a flight of 20 minutes, you can get back to the Capital city of Kathmandu. Make a roam around Basantapur Palace Square, this place held palaces of Malla and Shah Kings. Basantapur Square is best known for craftsmen over several centuries there you will find beautifully crafted temples and Hanuman Dhoka Palace. If you are able to manage time go to Patan Palace Square and Bhaktapur Palace Square. In the evening go to Thakali Kitchen, where you will find typical Nepali dishes and cultural programs. After dinner, visits a local disco or pub and grab the opportunity of nightlife at Kathmandu. Stay overnight at Thamel, Kathmandu.

16
Get a taxi or hire a private vehicle from the hotel to Tribhuwan International Airport at your convenience. You will receive warm cultural Goodbye hoping to revisit Nepal.

Gokyo Lake to Everest Base Camp via Chola pass trek

days
from
USD 955
Price starting from

Gokyo Lake to Everest Base Camp via Chola pass trek 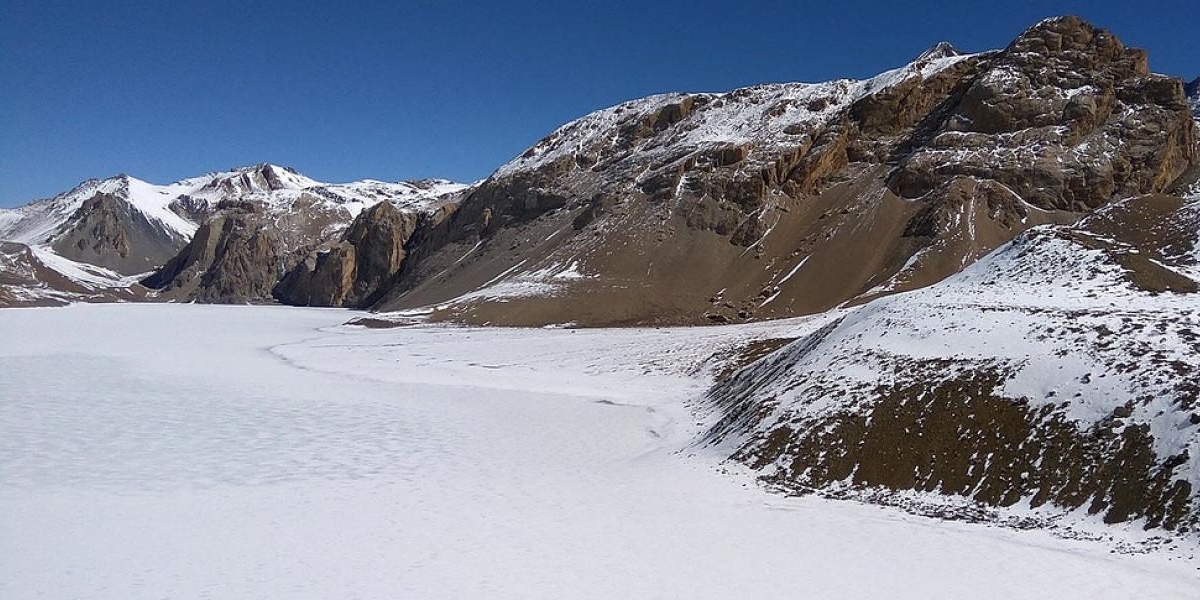